A secretive liberal dark-money juggernaut spent more than a billion dollars in 2020 to help President Biden win the White House, take the US Senate and hold the US House of Representatives.

This group, Arabella Advisors, isn’t a household name, but if there is a liberal cause that you’ve heard of, Arabella is likely funding it. And now the group is turning its attention to the Supreme Court.

Arabella, which former Clinton administration official Eric Kessler founded in 2005, manages a network of five nonprofit groups: the New Venture Fund, the Sixteen Thirty Fund, the Hopewell Fund, the Windward Fund and the North Fund. Each of these groups focuses on different policy issues, but they all operate under the Arabella umbrella.

With its base of billionaire donors including Bill and Melinda Gates, Pierre Omidyar and Hansjörg Wyss, the Arabella network doles out money to hundreds of stand-alone organizations across the country, as well as the liberal pop-up groups they establish and control.

This financing scheme allows these pop-up groups to disguise themselves as local, grassroots advocacy organizations, but in reality their money all traces back to one dark-money behemoth. The Sixteen Thirty Fund alone routed over $60 million to political committees backing Democrats and President Biden. 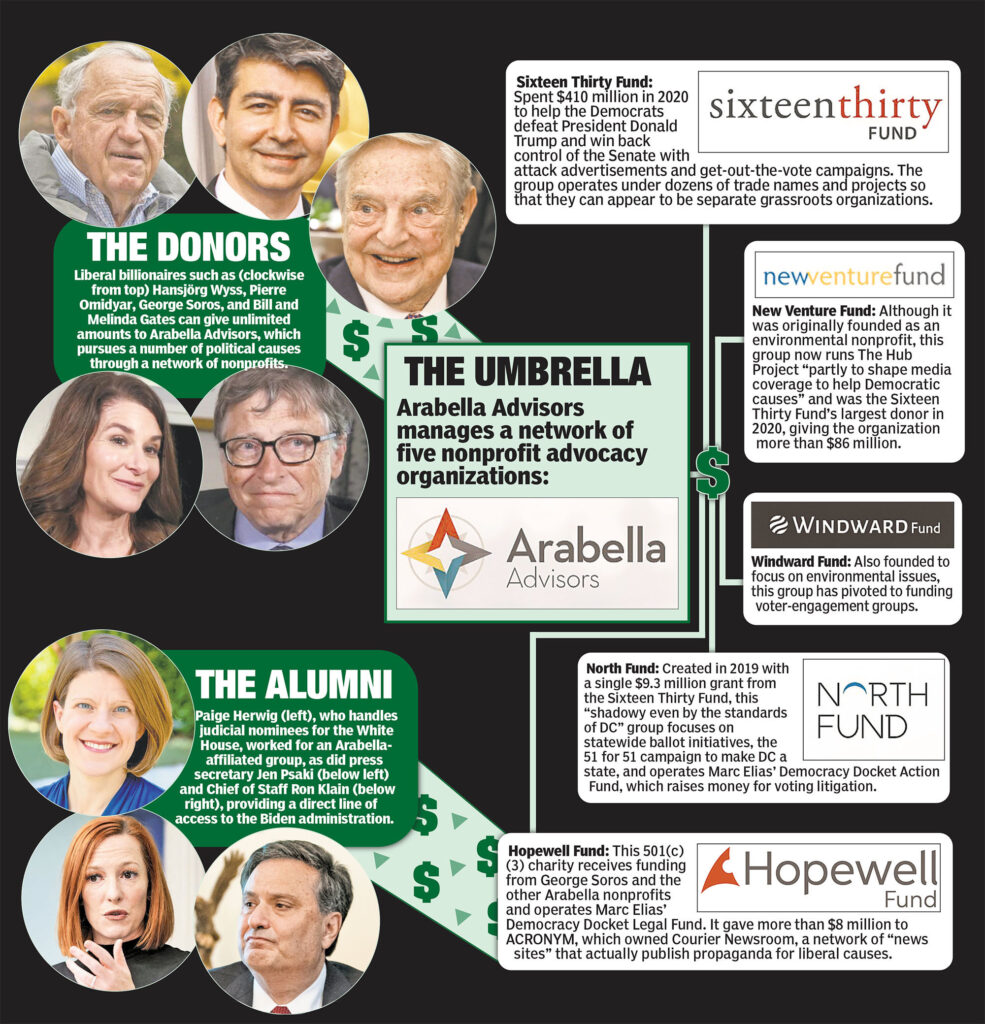 Since the Arabella network does not directly fund politicians, its donors may remain anonymous, and there are no limits on what they can donate or what it can spend.

The Arabella operation is tied to nearly every public policy shaping the narrative in Washington, DC, for the past 15 years, and activists move easily from its groups to positions in government. From the Department of Justice to the Department of Energy, you would be hard-pressed to find an agency without senior officials connected to Arabella.

One of these groups, Demand Justice, began as a project of the Sixteen Thirty Fund. This dark-money group showed its power in 2018 when it sought to torpedo Justice Brett Kavanaugh’s nomination through $5 million in advertising. Now it’s preparing to exert its influence over President Biden.

Several administration officials who are playing crucial roles in the nomination process have extensive ties to these dark-money groups. Both Paige Herwig — who spearheads the administration’s judicial-nominee-vetting process — and White House press secretary Jen Psaki worked for Demand Justice before joining the administration.

Additionally, Ron Klain, President Biden’s chief of staff who is serving on the administration’s senior search team along with Herwig, led the Center for American Progress Action Fund, which received $3.2 million from the Sixteen Thirty Fund in 2020.

This revolving door of dark-money officials has captured President Biden’s ear and will heavily influence whom he chooses. With Herwig, Klain and Psaki in place, and all playing an important role in the search for the next Supreme Court Justice, Demand Justice is ready to pounce.

The group has already launched an ad about the vacancy and is pushing a shortlist of candidates that it deems sufficiently radical. Conveniently, four of these candidates are also on President Biden’s shortlist.

Arabella and its dark-money backers are on the verge of hand-picking the next Supreme Court justice, a lifetime appointment whose decision will impact American lives and livelihoods for decades. With President Biden in the Oval Office for, at least, the next three years, they’re just getting started with a left-wing agenda for which they’ve paid handsomely.

Caitlin Sutherland is the executive director of Americans for Public Trust.